"This is a pivotal moment in my life that I will never forget. Black lives will always matter and it’s time everyone understood and practiced that." 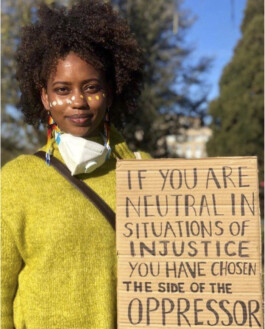 "I will start by acknowledging the traditional custodians of this country, The Ngunnawal, Ngambri people, and their continuing connection to land and community. I pay my respects to the Elders – past, present, emerging – and to all First Nations People that are currently present.

My name is Tove. I am born and raised in Kenya by a Kenyan mother and Danish father and currently reside in Aarhus, Denmark. I arrived in Australia in January of this year and have since been forced to stay put due to COVID-19. I have never attended or facilitated a protest before, so this is all a first for me. Please bear with me.

When I created the “Black Lives Matter - Peaceful Protest” event on Facebook, I expected my sister and I to stand in front of the US Embassy, in a simple ceremony expressing our frustration at the continued disregard for black peoples lives and rights. Having recently moved to a predominantly white country, I have becoming growingly aware of how my presence in a room or on the streets is addressed and that it at all, needs addressing. This is only a slight inkling of the discriminative episodes I and other people of colour, continue to be forced to experience.

Although the protests had been ignited through George Floyd’s public murder, by and for the African American population, this was a reality check and outcry for the global black community. It didn’t matter to me that I am neither American nor Australian. Borders could not stop me from speaking out against racism, because I learned that borders did not stop racism from plaguing communities of colour around the world.

At the time, I was part of a global community ignorant to the racism present in Australia, felt most acutely by Aboriginal and Torres Strait islander people. If I am honest, I was entirely unaware of their history altogether. I have since learnt, that even local Australians are seemingly unaware of these issues and how their frighteningly unaddressed colonial history has allowed the mistreatment to continue.

I wasn’t aware that although Aboriginal and Torres Strait Islander people make up only 1.9% of the ACT’s (Australian Capital Territory’s) population, they currently make up 22% of the ACT's prison population.

I wasn’t aware that 432 Aboriginal people have died in custody since 1991 and no reforms have been made since. This number has now risen to 437, as stated by an article published by "The Guardian, Australia edition" on the 9th of June 2020.

As long as leaders and figures of authority do not acknowledge that some police and members of the public, inherently view people of colour as a pest and threat, then there will be very little change in our treatment and we will continue to witness cases of lethal violence in and out of custody, with no convictions or persecution.

If the time isn’t taken to understand and learn about First Nations peoples culture and the troubling history of mistreatment generations of their people have endured, law enforcement will never be able to stop discrimination from clouding their ability to fairly police. This goes not only for Aboriginal and Torres Strait Islander people but every person of colour residing in Australia.

It is especially important to me, following the Black Lives Matter protests, to stress the significance of supporting similar local movements by signing petitions, sending letters and putting our names on as many documents as we can, urging for radical social and police reform. I urge you to consider what part you are playing in this movement. Are you amongst those that, due to privilege, are unaware of the discrimination present in your work places, schools, medical centres and correctional facilities? How can/are you contributing to these efforts in your local community?

“If you are neutral in situations of injustice, you have chosen the side of the oppressor...” – Desmond Tutu.

I am blown away by the numbers in the community who have rallied in support of this cause but I urge us to remember how painful a day like this must be, for the friends and family of those who have been lost. Those who must painfully relive their loss and who’s family members now serve as Martys for this movement. In this time especially, I ask us to lead with a little more kindness and compassion in our hearts.

I’ll finish off by sending my sincerest gratitude to all of you that are here today. To Bradley Mapiva Brown (founder of The Ngunnawal Youth Council) and The Ngunnawal Youth Council members for reaching out as the event blew up online. To Luca Corby (Co-host), Leah House (Case Manager at the Women’s Legal Centre ACT and organiser of the protest), Billy T. Tompkins (Local Aboriginal Community Leader and organiser of the protest) and all the other organisers and volunteers, who’s contributions and efforts allowed the event to run impeccably.

Finally to the Elders for their welcome to country and blessing and the Ngunnawal, Ngambri mob, for allowing our events to merge as a united BLM protest that represented and supported all people of colour in Canberra. For this I am especially humbled!

This is a pivotal moment in my life that I will never forget. Black lives will always matter and it’s time everyone understood and practiced that."