A few weeks after the murder of George Floyd, anti-racist protests on colonial statues inspired by the Black Lives Matter (BLM) movement took place in Lisbon, a city where most of the Portuguese Afro-descendant population lives. The most contentious intervention targeted Father Antonio Vieira (Lisbon 1608 – Baia 1697), a missionary Jesuit priest, great figure of Baroque Portuguese literature and language, colonial diplomat and politician. The extensive scholarship on his life and activities reveal Father Vieira as an extremely complex and controversial historical figure.

A particular prism explains the relevance of this statue in the public debate and why it was targeted by protesters, instead of any one of the many other historical figures representing kings, “discoverers” and colonisers situated in Lisbon’s public spaces. The intervention did not target only the Jesuit priest, nor simply colonial Portugal of Vieira’s time, nor is it a general attempt to challenge the colonial narrative, it is a dispute of the current Portuguese immunity system in the first place, as this particular statue was inaugurated as recently as 22 June 2017. It constitutes a criticism of the discursive narrative brought by the statue, which continues to frame the role of memory in current politics, and as such the symbolism of the statue is crucial.

Compared to countries such as the USA, UK, France and Belgium, the BLM related heritage interventions witnessed in Portugal are less vigorous. Although social activism is fervent in the country and mobilises thousands of people against racism, it is comparatively less influential than elsewhere, as most of the work is carried on in the periphery and is largely silenced in public debate. As underlined by the rapper, sociologist and activist Chullage, the dominant position is the negation of racism, the rejection that Portugal is racist. On the one hand, this is caused by the fact that the country was the last European imperial power to decolonise (in 1974 and 1975), thus colonialism is still too recent and painful a past to deal with. On the other hand, its long colonial history would justify a deep engagement with the debate about the legacies of that history in society, however, this debate is unfolding slowly and only began intensifying quite recently.

The conservative and defensive narrative of Portugal as a non-racist country that established a miscegenated and brando (moderate) colonial empire, dominate the political debate. As this narrative is receiving increasing criticism, a more extremist defence emerges with the result of the unprecedented election of an extreme right party in the democratic parliament in 2019. However, the cultural soil on which it builds is reinstated by the main authorities and echoed in the public statements. For example, in 2017, President of Portugal Marcelo Rebelo de Sousa visited Gorée, a Senegalese island from whose port enslaved people departed for the forced transatlantic crossing. Where spiritual and political leaders around the world have come to express public apologies for the historical role of their respective communities in the trade of enslaved africans, President Rebelo de Sousa has affirmed instead that when Portugal started the long process to abolish slavery back in 1761 it recognised “human rights” and the humanity of the people enslaved. This is a displaced and misleading understanding of history, as highlighted by historians, reminiscent of the lusotropicalist discourse promoted by the dictatorship of Antonio de Oliveira Salazar. Indeed, this approach denotes a substantial closure to the debate related to Portuguese historical responsibility, and reinforces the negation of racism.

Even though the President’s speech received extensive criticism and was contested by an open letter from activists and public intellectuals, the defensive responses have been diversified and long-lasting from the front defined as “guardians of lusotropicalist consensus”. During the same trip to Senegal, the Portuguese President restated the benevolent narrative of Portuguese colonialism, renovating de facto what was the domination of the late empire, allegedly characterised by “harmonious relations, colonial past, ability to adapt and cultural integration”. The project to construct the “Museum of Discovery” in Lisbon in 2017, contained in the electoral programme of the current mayor of Lisbon, was also framed in a similar narrative. The socialist mayor was re-elected and the debate has continued ever since and was renewed very recently.

These political dynamics build a strong immunity to anti-racism efforts in the Portuguese public sphere, with regard to adequate decolonial debates in relation to the colonial past. This is confiermed by the choice of the simbolism of Father Antonio Vieira wearing Jesuit dress, standing and stretching his left arm high with the cross in his hand. Around his legs, three half naked indigenous children shelter under the protection of the Father. The iconography of the statue traces an 18th century engraving and this is an essential point for understanding the paradox of representing memory in Portugal, due to the fact that the statue was inaugurated in 2017. 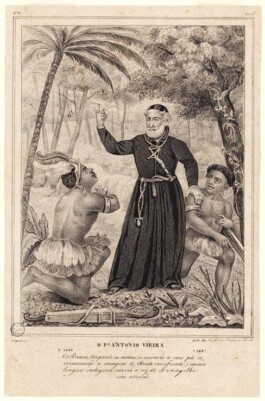 A few months after its unveiling, the statue was targeted by protestors on 5 October, the republic day of Portugal. Considering the historical ambivalence in the Jesuit discourse to the enslavement of African people, and the conservativism of Father António Vieira, a group of anti-racist activists aimed to pay homage to the victims of slavery by bringing flowers and declaiming poetry around the statue, but they were forbidden to do so by “Portuguese first” and “identity shield” groups members; one of the leader of these group defined his actions as those of a “patriot who went to defend the disfigurement of history”.

It is revealing that the BLM inspired activism of June 2020 reopened the debate about the statue to a point that forced the emergence of some relevant information, that were not publicly known before. The statue was commissioned in 2016 by the Santa Casa da Misericordia to symbolise one of Father Antonio Vieira’s humanitarian achievements. Fifteen artists participated to the public concourse, and, even if the jury did not consider any of the projects as qualitatively satisfactory (the winning one was evaluated with 62.25 in a 1-100 scale), the statue was erected in the public space. It is relevant to stress the absence within the jury of a historian, who may have identified the failed perception and anachronistic nature of the iconography. Infact the statue is an uncritical projection of a reminiscent imaginary of the Salazarist dictatorship. This process makes evident a strong lusotropicalist vision and a fundamental paradox of what statue represents.

Interviewed about this polemic, the artist who created the statue, Marco Fidalgo, defended his work, saying it does not diminish indigenous people, but rather reflects their dignity from the “greatest figure”, the child (probably referring to the spirit of the Gospel). Moreover, Fidalgo maintains that his work aims to connect the past with the present, where the defence of indigenous peoples in America is timely and urgent.

Critics include the Jesuit Father and artist João Sermento, who affirms that the heritage intervention on the statue questions the narrative related to Father Vieira, while its conservative symbolism fails to convey the complexity of Vieira’s life. The historian Pedro Cardim further suggests that the representation offers a benign image of the Father and of Portuguese colonialism, while representing indigenous people as subjected and passive. In addition, a group of scholars argued that such iconography represent the “eternal lightness of anachronism” used by those guarding “the lusotropical consensus” to defend their version of history. For the historian Daniel Gamito Marques, such statues perpetrate paternalism and colonialism through social Darwininsm – social hierarchy dynamism headed by the strongest amongst humans, artificially divided in races. With the developed and evolved European on top, and below, the backward and primitive indigenous people, this image reproduces colonial imaginary. Vieira (and the Portuguese coloniser) is the “benevolent” figure, while the indigenous people are inferior both in their physical position and in their chronological symbolism. The sociologist Boaventura de Sousa Santos argues that as long as statues like Vieira’s defend a present that is characterised by capitalism, colonialism and patriarchy, they will continue to be contested.

In the intervention of last June, the face of the Father was painted in red and the hearts of the children were drawn of the same colour, while the pedestal was tagged with “decolonise”. The municipality cleaned the statue the next day and a judicial case was initiated to identify and prosecute the perpetrators, with both the Portuguese President and Lisbon’s Mayor condemning the intervention as vandalism. These condemning postures also serve to thwart the expansion of the necessary debate about the impact of heritage discourses for social justice. This shows the paradox based on this anachronism, firstly because the past is crystallised in an obsolete and inadequate image that fails to understand its complexity, and second because the iconography excludes the plurality of emerging demands from the social diversity of contemporary Portugal.

As suggested by Maria Paula Meneses, institutions should create independent bodies to evaluate existing statues and toponymy and rename them after “historical figures that promote values such as freedom, dignity, equity, peace and justice”. Acknowledging the merits of this idea, besides glimpsing the many obstacles for this proposal to become a real option, a few key questions arise: How do you make sure that these bodies are effectively independent and represent wide disciplinarily, professional and political perspectives in order to embrace the debate with adequate openness? What are the possible actions that the body can recommend related to existing statues, only removal and reframe, or are there other possibilities? How do you extend the debate from within the specialised body to society at large, in order to make sure that diverging opinions can be considered and nobody feels excluded from the decisions that are implemented? How can you make this a living and active process as opposed to closing it in the past? These may be questions made all the more relevant in response to the debate that has been reinvigorated in Portugal since 2017 and which has been given further impetus during the last few months.

Researchers of the University of Coimbra – Centre for Social Studies. This article is part of the project ECHOES European Colonial Heritage Modalities in Entangled Cities that has received funding from the European Union’s Horizon 2020 research and innovation programme under grant agreement No 770248.