Black Lives Matter and the Removal of Indro Montanelli's Statue 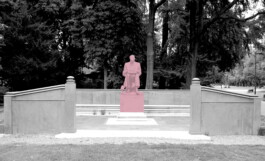 In June 2020, the statue of renowned Italian journalist Indro Montanelli was covered in red paint by a group of activists. This act, as well as the request of I Sentinelli, another activist group, to remove the statue of the journalist from Milan’s public gardens, fuelled a much-needed discussion about Italians’ crimes in its ex-colonies and the historical origins of racism in contemporary Italy. I discussed these topics with the leader of I Sentinelli, Luca Paladini.

Discussions on the possible removal of statues dedicated to renowned colonialists and slave traders have been circulating for years among activists, scholars, and politicians. Thanks to the Black Lives Matter’s anti-racist protests, the discussion about the possible removal of these symbols of colonialism and racism reached a larger public. Newspapers around the world reported about the removal of the slave trader Edwards Colston’s statue from Bristol Harbour, and pictures of the removal of Confederate monuments in the United States became viral. Less attention, however, has been given to similar debates taking place outside the UK and the USA. In Italy, for instance, the Black Lives Matter movement resurrected a long-time diatribe about the statue of Indro Montanelli, one of the most famous Italian journalists of the 20th century.

Montanelli has always been a controversial figure, even if few would question his contribution to Italian culture and intellectual life. In his youth he was sympathizer of the Italian Fascist regime. In 1935, the young journalist left for Abyssinia (now Ethiopia) ready to support the Italian ‘civilizing mission’ in Africa. While in there, however, he grew disillusioned with Italian Fascism’s colonial plans. His experience in Africa weakened his admiration for Benito Mussolini and for the Fascist Party. Once back in Italy, he worked as a journalist reporting from several different countries and contributing to numerous dailies. In 1943, Montanelli joined the liberal resistance group Giustizia e Libertà. This association nearly cost him his life: because of his political activities, in 1944 the Nazi authorities sentenced him to death. The journalist, however, escaped the execution fleeing to Switzerland.

In the post-war years, Montanelli became one of the most famous journalist and intellectuals in Italy. In 1973 he founded the conservative daily Il Giornale. In 1977 he was shot by two members the radical left-wing group Red Brigades, but he survived the attack. The last years of his life were signed by his quarrels with Silvio Berlusconi, major shareholder of Il Giornale and leader of the populist party Forza Italia. Montanelli died in 2001 in Milan.

His stellar career, however, did not protect him from controversies. In the post-war years Montanelli was repeatedly accused of being a racist and a rapist. These accusations were related to Montanelli’s stay in Ethiopia. While fighting in the colonies, he bought and ‘married’ an Eritrean twelve-year-old child named Destà. During a 1972 interview in the television show L’Ora della Verità, he described in detail his sexual relationship with the minor, describing it as normal in Africa. His opinions, however, were contested by the Elvira Banotti (1933-2014), an Italian journalist of Eritrean descent, who accused him of sexual abuse against a minor.[1] While admitting that he would have never treated an Italian child in the same way, for the rest of his life Montanelli never showed signs of remorse for his actions.

[1] The video Indro Montanelli’s interview and of the intervention of Elvira Banotti is available on Youtube.

Despite his controversial life and ideas, in 2002 the public gardens of Milan were renamed in his honour. Furthermore, in 2006 a bronze statue of the journalist was placed in the park. From the very beginning the monument has been subjected to criticism, as activist groups started contesting the presence of the statue in the park. For instance, in 2012 an anonymous group stained the monument with red paint and placed a fake bomb under it.[2] On 8 March 2019., during the march for International Women’s Day, the feminist movement Non Una di Meno covered the statue with pink paint in sign of protest against gender-based violence.[3]

[2] An article about the intervention is available on the website of Il Giornale.

The most recent action against Montanelli’s statue has been taken in June 2020, when, in support to the Black Lives Matter movement, the activist group I Sentinelli publicly asked Milan’s mayor Giuseppe Sala to remove the statue of the journalist from the park. Furthermore, they also asked the park to be renamed.[4] Few days later, Montanelli’s statue has been again covered in red paint, while his name, carved at the bottom of the monument, has been covered with the words ‘racist’ and ‘rapist’.[5]

The Mayor of Milan, however, refused the request of the I Sentinelli, as he thinks that ‘lives should be judged in their totality’ and that Montanelli’s contribution to journalism deserves to be celebrated.[6] Most of Italian journalist and intellectuals agree with the mayor’s statement.

[5] An article about the case of Montanelli’s statue was published in The Guardian.

[6] Euronews.com on the mayor of Milan’s declaration.

The new intervention against Montanelli’s statue has been instrumentalized by the leaders of right-wing parties, such as Fratelli d’Italia and Lega Nord. These groups condemned the ‘vandalism’ against the statue and expressed their opposition to the idea of removing the monument. On 15 June, some members of the party Fratelli d’Italia showed up in the park waving Italian flags and cleaned the statue from the red paint. Their actions aimed at framing the activists’ actions as an attack to the Italian nation and a symbol of incivility against public goods. The leader of Fratelli d’Italia Giorgia Meloni declared that: ‘Montanelli’s statue has been soiled by analphabetic radical chic with the excuse of fighting racism. Ladies and Gentlemen, here are the new Taliban, here is the civility of the politically correct.’[7]

How will the debate about the statue will continue now? What do the activists seek to achieve? I talked with Luca Paladini, the spokesperson of the anti-fascist group I Sentinelli, about their aims and their future projects regarding the statue.[8]

My first question was about the identity of the people who intervene in the debate, as all the people cited in journals and newspapers are conspicuously white, and mostly men. Paladini confirmed my impression, adding that most of the public figure who refuse to remove the statue are male journalists in the fifties and sixties who were colleagues of Montanelli or personally knew him. Paladini mentioned that the discussion conspicuously misses the voices of people of colour and of victims of sexual violence. I Sentinelli have contacted other anti-racist groups and feminist groups, but they are not collaborating just yet. According to Paladini, the absence of diversity in the debate regarding the statue is a problem, and he hopes that in time more people would speak up.

[8] Luca Paladini was also interviewed by the TV Program Le Iene. A full video of the interview (in Italian) is available here.

Despite the lack of diversity, Paladini told me that since I Sentinelli made public their request to remove Montanelli’s Statue, tens of people contacted them to express their support. In particular, many women express their gratitude for informing the public about the problem of sexual violence and felt compelled to know more about Italian history of colonialism. According to Paladini this is exactly what I Sentinelli sought to achieve: open a debate, educate people, and make them more aware of systematic racism and the problem of sexual violence in Italian society.

I also asked Luca what I Sentinelli would have done with the statue if Milan’s mayor had agreed with their request of removing it from the park. He answered that it was not their intention to destroy the statue. Simply, I Sentinelli thinks that Montanelli should not be celebrated in a public space such as the Milan public gardens. Luca Paladini think that is a shame to dedicate a public place to a person who throughout his life displayed troubling racist ideas. Nevertheless, he thought that the statue could be placed in a more confined environment. For instance, he thinks it would be quite adequate to place the statue in the offices of the dailies Il Giornale or Il Corriere della Sera. I Sentinelli do not criticize Montanelli’s career as a journalist, but they do not want that the Milan public park, a space open to people of any gender and ethnicity, to be dedicated to him.

Finally, we discussed the future plans of the group. Since the removal of the statue seems to be out of question for now, I asked Luca Paladini if I Sentinelli have any alternative plan. He told me that they will continue to fuel the discussion, and that they are now thinking about possible ways to address the problem. In particular, since removal has been refused, they are thinking to propose to add something to the park, for instance a statue of Destà, Montanelli’s underage wife, to commemorate the victim of colonial violence and of sexual abuse.

The case of Montanelli’s statue place Italy in the middle of the debate about the decolonization of European heritage. Activists’ interventions are fuelling a much-needed discussion about Italians’ crimes in Africa and the historical origins of racism in contemporary Italy, subjects that are often repressed in the public arena.

Many thanks to Luca Paladini (spokesman of the activist group I Sentinelli) for agreeing to be interviewed. Laura Pozzi, postdoctoral Fellow @ "ECHOES - European Colonial Heritage Modalities in Entangled Cities" (Horizon2020) – Instytut Socjologii Uniwersytet Warszawski / Institute of Sociology University of Warsaw